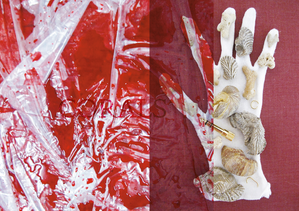 “Sex,” writes German artist and poet Natalie Häusler in her book-length poem Corals “is the ecology of the poem.” Or put differently, a poem can only exist in the relationships between bodies – in the eroticism of being-together that is continually formed and transformed through language. For 'Corals', her second solo-show at Supportico Lopez, Häusler continues her investigations into the relationships between visual-art practice and the poem as a lived phenomena. Using a combination of sound, painting, sculpture and text, 'Corals' proposes an environment in which Häusler's homonymous poem can live.

Like the poem itself – which plays with its homophone 'choral', ebbing and flowing in various directions, using saturated imagery and linguistic shifts in order to explore a diversity of themes such as solitude and symbiosis – Häusler's exhibition presents viewers with a number of fluid forms. Together, the body of works on view coalesce to evoke a nightclub setting – drunkenness, rhythm and sweat. A series of coral-colored doors made from acoustic dampening foam, while referencing notions of access, privacy and silence, stage intimate encounters within the gallery space. Palm-shaped agglomerations of fossilized coral, oysters, bracelets and audio-adapters. Elsewhere, an audio recording of Corals, read by several protagonists who had a role in the poem's emergence, plays inside a bar-like sculpture that features printed excerpts from the poem immersed, along with aquatic plants, in wine bottles. Other works further allude to the act of writing and its affective register as an anonymous message addressed to nothing and no one in particular. “Hugging, nodding, walking.”

A poem might be worthless outside its limited readership, an abject and fragile ornament. But as Häusler suggests, it wants to be warm, to be felt, to be plastic, to be recycled and rejected. It also “wants to be / graveyard.” But not to annihilate itself. The poem wants to remember. When was the last time you left a club and it was morning?