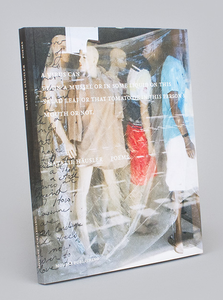 Natalie Häusler: A Virus Can be on a Mussel or in Some Liquid on This Salad Leaf or That Tomato or in This Person's Mouth or Not

A Virus Can be on a Mussel or in Some Liquid on This Salad Leaf or That Tomato or in This Person's Mouth or Not brings together two recent bodies of work by German artist and poet Natalie Häusler. “Impressionnisme,” was written in conjunction with an exhibition at M.1/Arthur Boskamp-Stiftung. The long ekphrastic poem delves into the phenomenology of sense perception, using the streets and museums of Paris as template and Impressionism as tool, to execute a distorted analysis of the passage of time. A series of short lyrics which appeared first in form of audio tracks in “Case Mod,” Haeusler's most recent solo exhibition at Supportico Lopez, modulate between public and private, moments of rest and transport, commentary and observation. More than simply providing insight into the artist's method of working with text and visuals, this book reveals her investment in poetic practice as an everyday documentary form—an affective record of place, placement of self and an effort to process observation.

It was ready for distortion. Us was ready for distortion, too. The poem, like us, like coral, is always already ready for distortion; that’s how it can repeat. And in repeating, become different. The scenes of Häusler’s poetry tend to be scenes that we recognise, but they are reproduced as part of a bolshie utopian project. To put it bluntly, Corals isn’t going to take your shit. “There is a strike in everything / at least the potential for it”. This poetry is constantly on the point of striking. It is not concerned by currencies or systems of value. It trades in cocoa beans, gold dust, almonds, leather money — found objects reinvested with beauty outside of the traffic of exchange. This caprice is the force by which the text grows, through paroxysms, shooting out spawn and scorn, which then find a place to settle within the broader landscape.

It forms an opulent water economy against aesthetic fetishism, where bodies grow, are excreted or excrete themselves, are thrown against their life on the page, thrown into words, and come to life where you might not expect them. Häusler reminds us: “there is blood in each word”, and the text smells of it, requiring the words to be perceived beyond their page-life in their material, colour, taste and smell. In this sense the word is a longing, a ferocious appetite and they often eat their way out. It, on the other hand has already eaten. It has eaten all the words. It is world - it fixes to the ground - but flies over the page.

It can be anything, in Häusler’s universe. Pronouns, adjectives, prepositions can all begin to act. “Urgent storms all over the place... Urgent calls Jürgen” — communication breaks down. That can happen when language and value become plastic. In other places though language condenses and crystallises, like a vein of hard mineral in rock. A creeping high pitch itch. How to translate a phrase like this? Or indeed, why? Which stands for the whole section included here. Is it slightly absurd to translate the work of a writer who fluidly and dexterously moves between languages? A little like butting into a conversation with an unhelpful answer. Häusler is already inside of things, speaking their language. A better idea might be to sit and listen to the reef.

Natalie Häusler is an artist and poet living in Berlin. A Virus Can be on a Mussel or in Some Liquid on This Salad Leaf or That Tomato or in This Person’s Mouth or Not came out in 2014 with Mousse Publishing Milan. Corals can be read in parts in VierSomes Publication 004, Veer Books, Birkbeck College’s Contemporary Poetics Research Centre (CPRC), London and online in the current issue of Blackbox Manifold (No.14). She is a co-editor of American Books.

(Audio track not available in all locations)