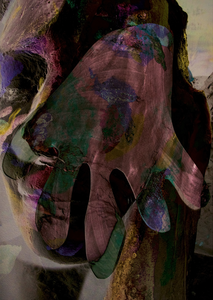 She is bell and he is beau.
Hello from Rue Desert.

Q: "I'm trying to say that a house is on a deserted dirt road. According to the dictionary, a deserted road is une rue déserte and a dirt road is a chemin en terre. How do I combine these 2? Should I use 'chemin' or 'rue'? And which adjective comes first? Thank you!"

I am constructing environments.

The locus amoenus is subversive but not private. It is not a solitary place, locus solus, but one of sociability. Love making, singing and even storytelling may take place here: See the shepherds of Theokrit, the lovers of Colonna, or the meeting of a group of storytellers in a locus amoenus, fleeing the plague in Boccaccio's Decameron.

The locus amoenus is primordial and quite literary, archaic and mediated through texts, conceived of by poets and architects: Architexture. [2]

The locus amoenus is a focal point of social organization. [3]

It consists of a basic set of recurring elements:
A Tree, A Source of Water, Sunshine, and The Song of Birds.

The (Hello) Tree, a fig tree, is said to have aphrodisiac effects and is also associated with a tendency to attract suicides. Only after Adam and Eve eat from the tree of knowledge in the Garden of Eden do they become aware of their own nudity.

The hands of the tree said hi to me. That was obvious.

The exhibition animates a linguistic presence in its environment, yet not one that heavy-handedly carries out a modern conflict of signification and the loss of words’ symbolic power. It is the language of poetry that is active. It has a secret intimacy with the Tree, Sun, Water, who say Hello, and wave their hands. It is a language where form bears meaning and therefore can still relate to the natural world as a place that we talk to. [4]