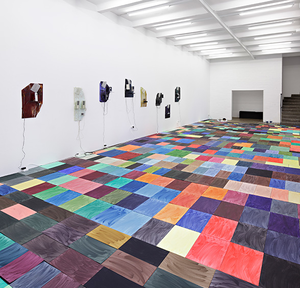 Natalie Häusler’s installation Case Mod (from: Case Modification) exacts from the gallery space a field in which intimate and reciprocal encounters between audience and art practice are put to the test. Häusler compiles a situation, combining several elements derived from a simultaneity of studio and writing practice. Emerging forms, in this case, watercolor, sculpture and poetry, query whether they can uphold their fragilities and force of expression when exposed to the viewer and to each other. They articulate their mutuality when arranged in the exhibition space, producing crosscuts and intimacies, of visual, written and audio material, as well as of object and spectator / reader / listener. The audience becomes belated witness of the art practice as such, which the installation at once showcases and archives. Yet the present moment is highlighted, as the visitors leave their own marks on the piece, subtly shifting the color palette or destroying it altogether. Audio recordings of the voices of close friends, who are practicing artists and writers, reciting the poems, track down their intimate reception by an audience that is involved in both activities, production and reception. They capture the moment of surprise, when the poem was read for the first time. The intimacy of this contact is shared with the passing visitor, who must come close to the audio shelf, to be able to hear the individual reading. These shelves, each of which is cut and built from one sheet of stained glass, and customized for its assigned set of outmoded electronic equipment, serve as seductive support and hazardous repellant at the same time. The temporary construction of a space of this kind is part of Häusler’s inquiry of forms of intimacy, risk, close contact with the material, and inclusion to question modes of reception.

Language, or “knife”, if we follow the poem, can break the rules a poem has set up for itself. Here, “knife” cuts the semantic chain that fruit and plum, as a whole-part lexical relation, establishes, and therefore makes the poem change course. We ask whether such clean incisions into an artwork’s inner logic can be achieved in visual practice as well. Natalie Häusler’s installation Case Mod (i.e. from: Case Modification) attempts to master the art of incision that poetic language seems to achieve with such elegance and directness. Language, bound by the laws of signification, allows for such sudden moves that can cause a drastic re-shuffling of the poem’s continued logic and imagery. Yet whereas “knife” can terrorize and hijack the lines of the poem, the knife-drawing on silk remains in direct and three-dimensional contact with its neighbors, the other artworks. It
hovers above and among them as a large exclamation mark or downward thrust, but its support, silk that remains fluid and in motion, is emblematic of  "knife's" continuity with a constructed and to a large extent fixed environment that moves forward in time on a single spatial axis. “Knife” within the installation also cuts open the installation and attempts a rupture, but the installation will not yield and abandon the other things it has gathered and brought together. It is the poem itself that gives us a taste for such continuing oscillation and movement in the image of “juice”, palette fluid matter that erupts from the cut object, spilling the poem and rendering its borders fluid. Similarly, Häusler constructs a floor from monochrome paintings on cardboard that ask for something to be spilled on their already water-based, painted surface, to wash its colors, shift the palette, soak and dissolve it.

As parallel to the poem’s stark shifts of image registers, the shifts in the installation take place on the fluid surfaces of painting, which cause more finely tuned ruptures. The color mosaics, installed on the gallery floor, are painted in monochrome, warm hues, but are also configured  as a structural grid. By that Häusler emphasizes the possibilities for variation and non-permanence of the grids that serve both as painting and architectural support.

Wall shelves built from tinted glass echo the monochrome palette of the floor painting, but also serve as structural support for the exhibition of Häusler’s poems, both in audio and print format. They break the sound waves that emanate from the audio speakers they carry, and become catalysts for the dispersal of Häusler’s poem’s in the exhibition space. The poems are read out loud by close friends, who are practicing artist and writers. They track down a moment of intimate reception by these readers who are involved in both the production and reception of the poem. The intimacy of this contact is shared with the passing visitor, who must come close to the audio shelf to be able to hear the individual poem. These shelves, each cut and built from one sheet of stained glass, each customized for its assigned set of outmoded electronic equipment, serve as seductive support and hazardous repellant at the same time.

Thus, the combined material oscillates between structural grid, and the contingencies and intimacies of painterly and poetic practice. The visitor finds her or himself in between those dynamic poles. Thus the installation both draws, even coerces the visitor into co-creating its surfaces, yet inserts antagonistic lines and breakages into those spaces of intimacy. The temporary construction of a space of this kind is part of Häusler’s inquiry into forms of intimacy, risk, close contact with the material, and inclusion as forms of reception.

Natalie Häusler’s installation Case Mod  exacts from the gallery space a field in which she puts intimate and reciprocal encounters between audience and art practice to the test. Her work interrogates the installation space as a space of social and political relevance, not by making statements via an argumentative dialectics, but through observation, commentary and systematic disruption, for which the inclusion of her poetry serves as focal point. Her commentary emanates from and necessarily includes the subjective, which she insists must remain visible in her work. Häusler generates systems and constructions that colonize the exhibition space in an exacting fashion, yet builds into these exhaustive structures parts that will disintegrate, that can spill and are fluid. Her poems, and language as such, remain part of the installation as points of contraction and literacy. They activate the gallery space as literate, social, and by extension political space. The convergence of poetic and visual practice is never hierarchical nor does one cancel out or override the other. Rather, the act of exhibiting her poems activates their potential for a formal as well as critical multi-dimensionality and both practices enter into a binding contract, which demands of these forms to remain accountable, to each other as well as to the viewer.

The book “Watercolors” documenting a one and a half year long correspondence in form of watercolors sent via email between Natalie Häusler and Californian artist David Horvitz is part of the exhibition. A book launch will be held on January 12th at Motto Berlin.