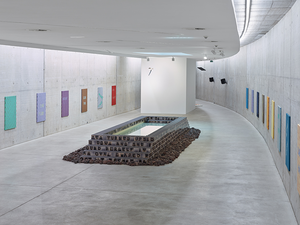 “Honey is either very hard or very fluid. If it's hard, it is difficult to cut, since there are no natural breaks. If it's very liquid, it is suddenly all over the place - I assume that you are all familiar with the experience of eating honey in bed at breakfast time.” 1

‘Natalie Haeusler. Honey’ is the fourth solo show in KIT’s (Kunst im Tunnel / Kunsthalle Duesseldorf) 11-year history, which given its extraordinary architecture and scale presents both a challenge and a particular opportunity for young artists.

Natalie Haeusler’s (1983-) intensive engagement with the tunnel architecture began over a year ago. Her artistic approach involves conceiving spaces or environments in which objects and languages come together organically. Painting and the written word in dialogue constitute her point of departure situated between poetry and visual art. In the process of creating a work, she integrates sculptural, painterly, functional and sound elements.

The ‘Roman de la Rose’ (1230/75), a medieval French allegorical poem on the art of love, was a highly popular text in its own day and provoked one of the first documented instances of feminist literary criticism. The poem’s plot consists of a lengthy dream that plays out within a walled (pleasure) garden, initiating readers into the art of courtly love through a number of ingenious allegories wherein the rose represents female sexuality.

Haeusler created an enclosed garden, loosely associated with the medieval original text, in which a number of states of consciousness are embodied through images, objects and sound. These allegorical figures are developed in a contemporary re-writing and textual transformation of a variety of source texts, that the artist has encountered during her literary research. At the same time, however, the works incorporate themes such as naturopathic treatments, ecology and reform movements.

In her work, ‘Ecology – Sunrise of the Heart’ (2018), viewers are invited to step two at a time onto a hexagonal platform comprising varicolored rhomboidal tiles saturated with organic and mineral-based pigments. Echoing the sculpture ‚Aquascape (Mountain I)’ (2018), an underwater environment supported by a plinth of hand-painted ceramic tile, the platform resembles a positive cast of a dried lake bed or an ancient sea floor, its surface indexed with what appear to be the fossilized remains of aquatic life: algae, kelp and sponges but also – incongruously – sheets of beeswax. At various points on the hexagon, men's voices penetrate the installation's ambient soundscape (a separate composition in six-channel surround sound played on studio monitors) of field-recordings featuring chimes and flowing water. Emanating from ultrasonic speakers overhead, these uncannily proximate voices (rendered audible in the interference patterns created when two high-frequency waves collide with a listener’s body) dispassionately recite peculiar strings of words:

“A sexual orbit is: the most penetrating of the three basic types of ionizing radiation;

A solar hormone is: the energy in a system that is available to perform useful work;

A daughter cell is: located in the Santa Monica mountains between the city of Malibu and the city of Los Angeles, California, and is one of the world’s largest open space preserves inside an urban enclosure;” 2

Like much of Haeusler’s work, ‘Ecology’s’ ‘house’ is thick with strangeness, pitching the viewer into a field of somatic and lexical discontinuities that replace one another incessantly.

The centerpiece of the exhibition is the work ‘Bethsabée reste au bains’ (2013/18), which can be seen as an extension of the fountain in medieval garden architectures.

The basin measuring ten meters long and two meters wide is a Kneipp bath filled with knee-high, ice-cold water, which also functions as a sound sculpture. This special form of bath was developed by Sebastian Kneipp for hydro-therapy around the end of the nineteenth century. Kneipp therapy additionally includes the use of herbal extracts, exercise and dietary recommendations, thereby aligning itself with the ‘Lebensreform’ movements that developed around the same time in opposition to industrialisation.

The basin’s tiled exterior was made by the artist, applying a single letter on each unfired tile by hand, which was then covered with a purple craquelling glaze. In doing so, she created a continuous text in which the letters resemble watercolors. The graphic symbols inscribed under the glaze seem to swim, visually enhancing the presence of water.

Haeusler’s poem ‘Bethsabée reste au bains’ is a re-writing of the biblical story of Bathsheba and King David. While Bathsheba plays a rather passive role in the original text, in Haeusler’s version she becomes the main protagonist, driving the action in her own particular way:

“Devastated / she went / underwater. / Underwater / she couldn’t / smell anything anymore, / which was exactly / what she aimed for./ But he was still waiting / at the edge of the pool / with his letter, / this king on a mission/ to be and to make history, / while she wanted/     to smell nothing, / which was / a very different aim / of course. / The water was /like a skin surrounding her skin, / while she was / like a gap within / this liquid, / her body an interruption of the     allover. / She knew well then / how to make use / of her solid state, / and finally felt / that she understood / the advantages of being / a lump of flesh, / feeling the contact / with each thing in a different way, / and feeling herself differently / depending on what she was touched by. / Then the water turned upside down and she found herself in an oval shaped room. It seemed as if she had in fact, in some way, traveled through the swimming pool to another place. Lack of oxygen must have caused this architectural space to take shape, the double oval ∞.” 3